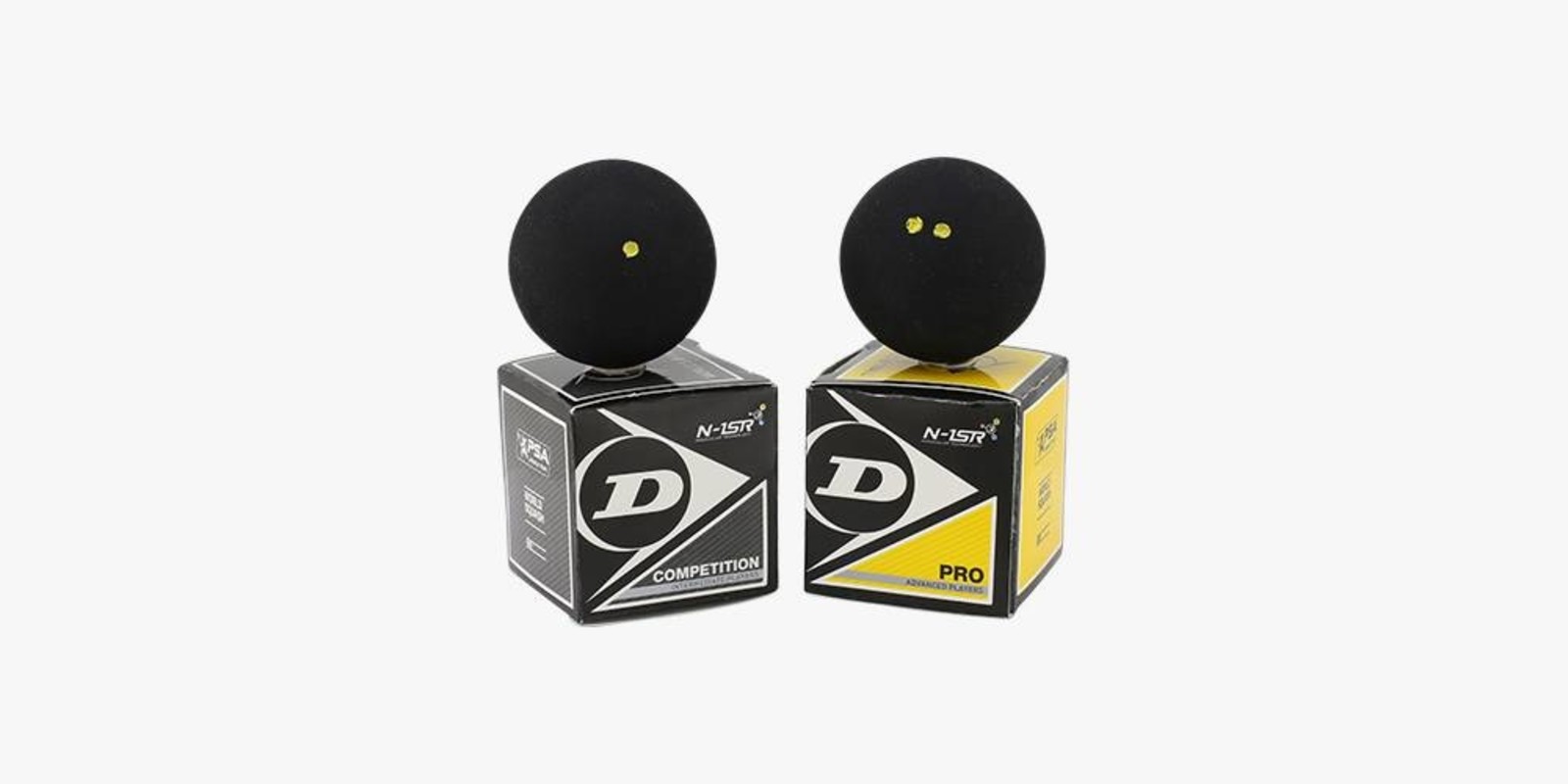 The large selection of different squash balls sometimes causes confusion and frustration among players. The purpose of having so many different balls on the market is to guarantee that players of all levels can enjoy squash and have fun on the court, but unfortunately choosing the wrong ball has an opposite effect. A beginner who does a little bit of research quickly finds out that the Dunlop Intro Squash ball (blue dot) is meant for newcomers and after some time the next step is the Progress Squash ball (red dot). But what often happens is that as their technique and game improve, the players too soon switch to Dunlop Pro Squash ball (double yellow dot), skipping the Competition Squash ball (single yellow dot) altogether. Read on to find out why it´s worth trying out the Competition ball even if you progress rapidly.

You often see players struggling to keep a rally going. The ball dies soon and the rallies are short and anything but fun and exciting. This is a pity because they could play long rallies and have much more fun if they chose a ball that better matches their level. The problem is not only the lack of information but also the fact that at most squash centers they only sell the Dunlop Pro balls, which are meant for advanced competition players.

The problem with playing with a ball above your level is that your technique isn´t good enough yet to heat up the ball in order to make it bounce properly. When you choose a ball with more bounce, it´s easier to hit the ball, you save energy as you don´t have to hit hard all the time, and you can have a lot of fun on the court by playing long, intense rallies. And that is ultimately the essence of squash.

However, the Dunlop Pro Squash ball seems to be nowadays the norm and everyone thinks that they have to be able to play with this ball. This is so untrue. The ball with the double yellow dot is designed for advanced and very experienced players. The Pro is the ball used by the professionals in all international tournaments and matches on the PSA tour.

Until 2001, the Competition Squash ball was the most demanding squash ball, but because the overall squash level has risen among the professional players, the Pro was developed. It has different playing characteristics and it better fits to the high level of today´s competitive and professional squash. But as I said, it´s interesting that until 2001 the ball with a single yellow dot was used in all professional matches, which means that it´s anything but a ball for beginners.

The difference between the Dunlop Pro and the Dunlop Competition balls is that the Pro has an even lower bounce. The Competition has the same dimensions as the official Pro match ball but 10% more bounce which gives you a little more time to play the ball and makes it easier to keep the rally going.

Unfortunately, players often forget that the temperature on the court affects the playing qualities of the ball. In colder weather conditions or on a court with air conditioning, it´s recommendable to choose a ball with a higher bounce. A squash ball is hollow inside and filled with air. By hitting the ball hard against the wall, this air warms up and the pressure increases, causing the ball to bounce better. If the ambient temperature is lower, you have to hit the ball hard all the time to keep it warm and to reach the same bounce. For this reason, the Competition Squash ball is also used by advanced squashers during training sessions and in cold weather conditions.

Unfortunately, generally there´s little information available about the differences between the Dunlop Competition and the Pro squash ball, which is why many people think they have to play with the ball with the double yellow dot. The fact is that in many cases, the players would get much more out of their time on the court if they chose the ball with a single yellow dot.

Remember that if you play with someone who has a lower level than yourself, it´s important to choose the ball that matches his or her level.

The best way to warm up a squash ball

Both the Dunlop Pro and the Dunlop Competition Squash balls must be played warm in order to perform optimally. The best way to warm up the ball is to get closer to the front wall, so you can hit the ball with a faster pace. Advanced players tend to start with hitting volleys only. After a moment you notice that the ball is getting warmer and you can move further back on the court to warm up the ball with long drives.

For how long you should spend on warming up the ball depends on the temperature on the court as well as on your technique and ability to hit the ball hard.

Another advantage of warming up the ball is that you also do a good warm-up for yourself before starting the game. Your body will be less susceptible to injuries. In addition, you practice your shots while you do the warm-up. Don´t underestimate the importance of the warm-up but dedicate enough time for it and make the most out of it by concentrating on every shot.

In the video below you can watch how two world top players Ramy Ashour and Mohamed el Shorbagy do the warm-up.

The Pro and the Competition Squash balls are available at Squashpoint in a handy tube or in pack of three balls. The advantage of a tube is that you can store the balls in an orderly and protected manner after use. This keeps them clean and you can easily find them in your squash bag.