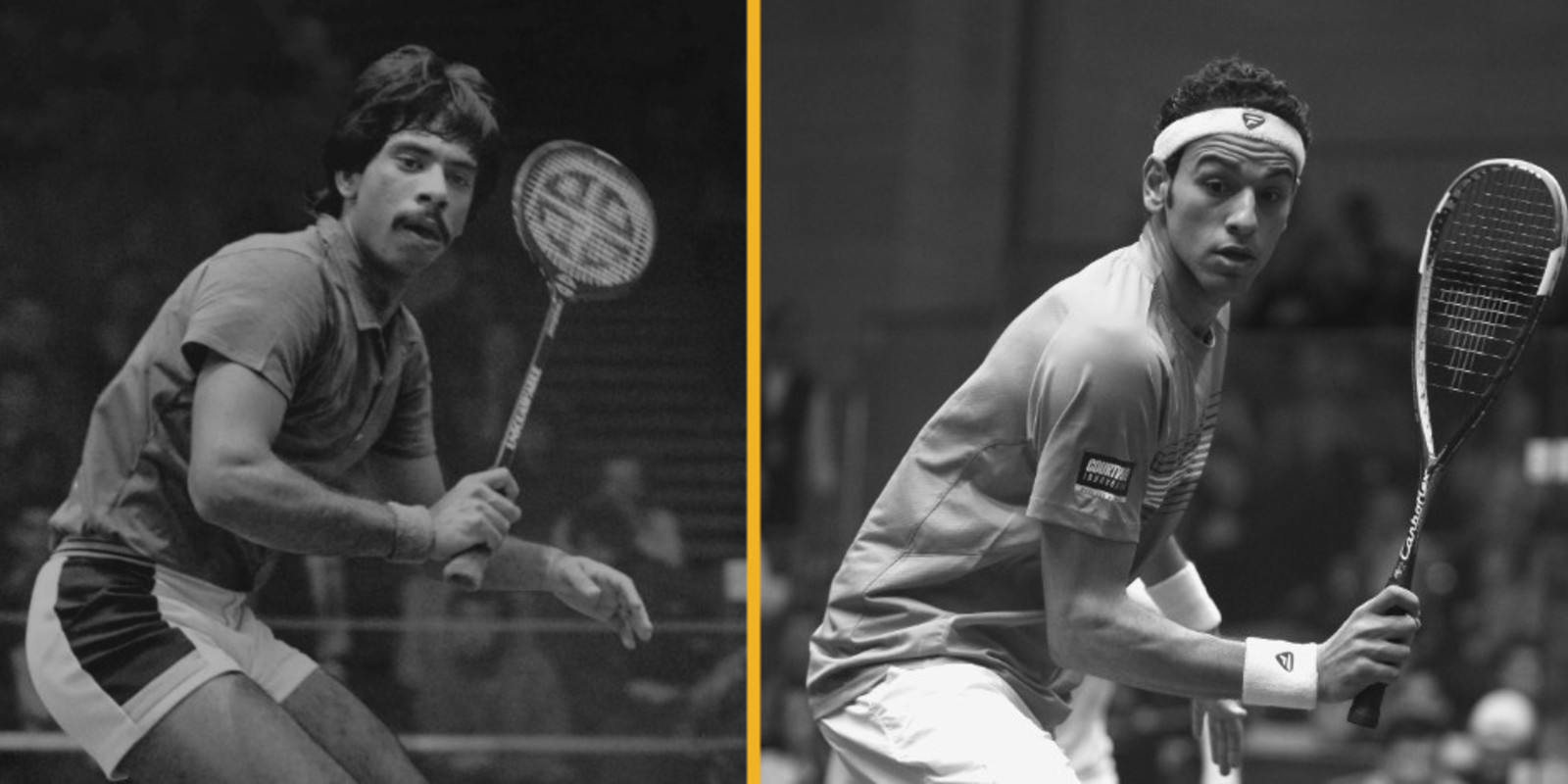 From wood to graphite: the evolution of squash rackets

We have come a long way since the first wooden squash rackets entered the market. Today's rackets have undergone a whole evolution and all technological developments have certainly benefited our sport. But you never get tired of seeing photos of Jahangir Khan with his wooden retro UNSQUASHABLE racket, an image that makes you smile time after time. Still today it seems amazing that he remained undefeated with these rackets during 555 consecutive matches, a record that no athlete has broken so far. And when I recently saw a photo on Instram of all the rackets someone had had from the age of 7 till today, 30 years later, I came up with the idea of taking a closer look at the evolution of squash rackets.

Today, most rackets are made of graphite or a mix of graphite with other materials. It is good to know what the most important differences are between these materials and how the material influences the playing characteristics of the racket. But before going into that in more detail, let us first look at the classic wooden frame. After all, these iconic wooden rackets have taken us to where we are today.

With their extremely long handles and small racket blades, the early squash rackets hardly resemble our contemporary "weapons". You can imagine how differently these heavy rackets performed compared to our lightweight rackets of 120 grams or even less. The biggest advantage of a light racket is that it allows you to generate a lot of racket acceleration and respond faster with a short swing. And another story is the power you need in order to hit the ball hard with a wooden variant. The high weight together with the small racket blade guaranteed it was not an easy task. The large blade of modern rackets provides more power because the string bed can move more up and down. But a large racket blade with a wooden frame would break at the first hit, that is why the blade was small. Consequently those early rackets also had a small "sweet spot" which meant you had to be able to hit the ball in that tiny area all the time. The advantage of a larger sweet spot is that you can control the ball over a larger area of the strings and it is not so disastrous if you hit the ball a bit outside of the center.

Around 1980 the first changes were made in the composition of squash rackets. A mix of fiberglass with aluminum meant a complete makeover and the first rackets with a drop-shaped blade came out. Dunlop and Prince were the market leaders in the development of the "new squash rackets" with which you could generate much more power with less effort. Not surprisingly, the classic wooden rackets disappeared in no time as if from the face of the earth.

The evolution of the squash rackets continued with the introduction of new materials such as carbon, titanium and graphite that not only made the rackets a lot stronger but also drastically reduced their weight. This development has been the most influential for the sport itself: the speed of the game has increased in huge steps, and in addition picking up squash has became much easier to the general public because with these "new rackets" it is possible to enjoy a nice game of squash with very little technique. This is what distinguishes squash from other racket sports which require many lessons before you can keep a rally going. Everyone can play squash, provided they have the right squash racket and the right kind of ball.

It is nice and nostalgic to see photos of the historic wooden rackets but they surely belong to the history; in today's fast squash there is no place for retro versions.

Nowadays, most rackets are entirely made of or contain graphite as the largest component. Graphite has a number of advantages compared to aluminum. This material offers players more control and excellently absorbs vibrations that occur when the ball touches the stringbed. Moreover, graphite makes the racket stronger and therefore more durable.

An aluminum racket also has its advantages. For example, aluminum rackets are cheaper and slightly heavier. They are a good choice for beginners because they do not break so easily even if you accidentally hit the wall, which happens quite a lot in beginners' game. This is also the reason why at many squash centres you can rent mainly aluminium rackets.

A disadvantage is that aluminum rackets are more difficult to maneuver. In addition, the poor absorption of vibrations can more easily lead to an injury in your arm, the dreaded tennis elbow. Also bear in mind that the high weight of aluminum rackets makes them unsuitable for very young players.

Pros and cons... cons and pros

In the old days, choosing a racket must have been easy because there was very little choice. But as we have seen, squash rackets have undergone a big evolution over the years and despite the fact that today all rackets are made of aluminum or graphite, there are big differences between them. The many technologies and the different weights can make it difficult to see the forest for the trees. When you buy a new racket, you have to consider what would best fit your playing style, standard and preferences. We made several racket review videos and we have written many blog texts whose purpose is to help you figure out what kind of racket could be the most suitable for you. If you are still lost in the jungle of different options, please contact us. We are happy to help you make the right choice.

You may also be interested in the following articles:
Stringing your racket – this is what you should know
The advantages of a light squash racket

Peter Eedy - 24 / 10 / 2019 @ 05:21
Good article, thanks.
I add that until the early 1980s, the Squash rules mandated that the head of the racket had to be of a certain maximum size and roughly circular (around 8"/200mm diameter, as I recall) and had to be made of wood. However, the shaft (from the grip to the throat) could be other materials--small diameter fibreglass and chrome-plated tubular steel were fairly common (this might have been a rule change from the 1960s?). The strings in 'good' rackets were natural gut (which didn't last very long) or nasty braided nylon in the cheaper rackets.
The wooden rackets weighed around 7-8 ounces (220 grams+)--around twice the weight of some modern rackets! Popular brands in the early 1970s in Australia were Dunlop Maxply, Spalding Executive and Slazenger
These rules were relaxed progressively from the early 1980s, to permit the use of composite materials (graphite and the like) and larger head sizes
Back in the day, grips were typically leather or towelling--no nice polyurethane grips! And the butt of the racket had a metal clip with a cord to wrap around your wrist to prevent the racket flying out of your hand.
As a former referee, I recall that teardrop-shaped rackets were sold in the early 1980s before the Squash rules permitted them--this presented a dilemma for referees, who were sometimes accused of being too pedantic!
My only regret about modern rackets is that they have robbed the game of much artistry (ditto tennis)--now everyone can hit the ball hard